The Past: Rockaway Beach Branch

In 1952 there was a fire on the trestle running over Jamaica Bay and the LIRR decided to end service. The LIRR decided to sell the rail to the City of New York so that it could rebuild the line for subway service. Plans had existed since the 1930s to convert the LIRR to subway but because of limited capacity on the Queens Blvd Subway the city chose to only connect the southern section via the A train. LIRR service continued to run from Penn Station to Howard Beach until 1962 when it was finally abandoned.

The Rockaway Beach Branch ran entirely above ground. From 63rd Dr to Atlantic Ave it ran atop an earth embankment, with overpasses at cross streets and the LIRR Lower Montauk Line. South of Atlantic Ave it ran on a wide viaduct with a connection to the underground LIRR Atlantic Branch in Woodhaven. The line continued, as it does today, across Jamaica Bay and splits with one branch serving Far Rockaway and the other serving Rockaway Park. 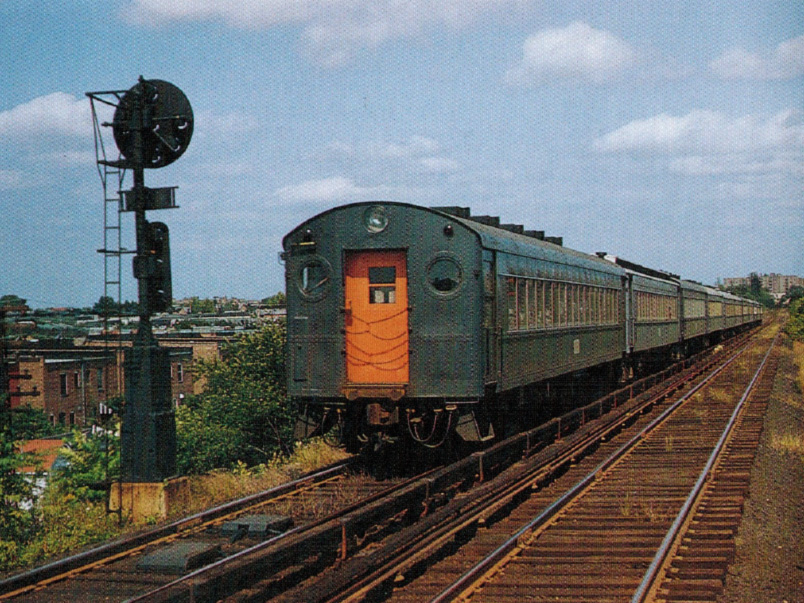 The QueensLink proposes rerouting the M train south after 63rd Dr-Rego Park station along a new 3.5 mile extension south along the border of Rego Park and Forest Hills, the through Forest Park, Woodhaven, and Ozone Park before connecting to the existing A train to Rockaway Park

The M would be routed to Rockaway Park, eliminating the current shuttle service and doubling overall service to the Rockaways. With the M no longer running to Forest Hills the G could be extended in its place, having been cut back to Court Sq in 2001.

Proposals in the past have looked at reactivating rail on the line but have faced opposition due to the perceived negative impacts trains would have on nearby homes.

An idea was floated in 2015 to convert the right of way into a High Line style park but this too went nowhere because it would have prevented any future use for transit.

Both new park space and transit options in Queens; this shouldn’t be an either-or situation.

So we took a look at the right of way again and tried to figure out a way for both parks and transit to coexist. The QueensLink was born. 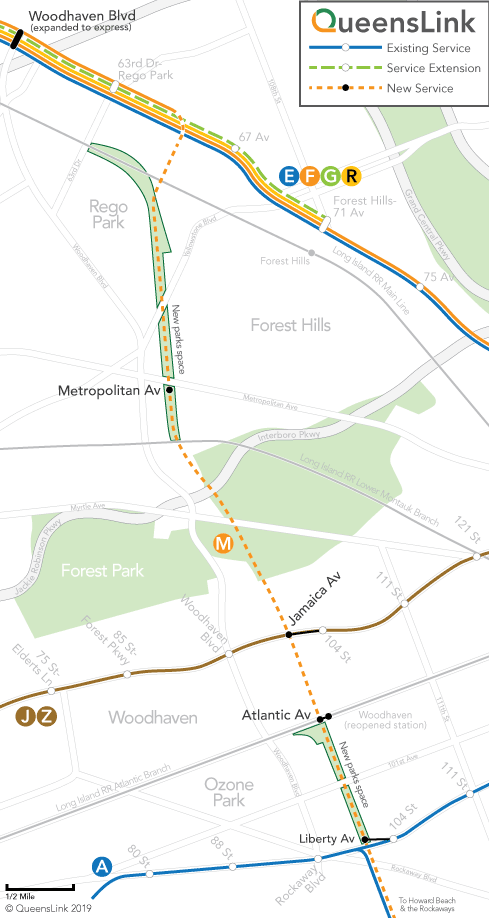 Map of the proposed route of the QueensLink

The section of embankment running from Fleet Street to Union Turnpike spans 100 feet at its base but only has about 35 feet at track level. There is no space to fit both new tracks and recreational facilities atop the embankment.

There are three overpass bridges that would need to be replaced (as examined in the Rockaway Beach Branch Study) An additional bridge would need to be constructed to replace a lost span over the LIRR Lower Montauk Line tracks.

The embankment changes slightly in elevation but stays roughly around 15-20 feet above street level.

At Metropolitan Ave there was a station, Parkside, but no trace remains. A new station would be built here.

But if the embankment was not there at all there would be a much wider space available to use for parks. Removing the existing embankment would create 25 acres of new park space.

The existing embankment looking north from Yellowstone Blvd showing the small landscaping improvements available if only rail was extended .

A modern aerial guideway could be built to replace the existing earth embankment. A guideway is a much smaller, concrete structure which would use modern technology which makes significantly less noise. These guideways are the standard for new elevated track built all over the world. In New York we have only tried it on the AirTrain to JFK Airport.
To further reduce unwanted noise and visual pollution, sound barriers would be installed on the sides of the guideway and smaller embankments, no more than 8 to 10 feet high, would run along the sides of the new open space. Once planted, trees would further shield homes along the route from noise and prevent park users and train riders from seeing inside.

Putting the entire transit line in a new subway underground would be the ultimate solution. To connect with the Queens Blvd Subway the QueensLink would need to build a tunnel from Queens Blvd to Fleet Street in either option. But here we would continue the tunnel south through Forest Park.

This type of tunnel construction would not be like what was used for recent MTA projects such as the 2nd Ave Subway and 7 Line Extension. Manhattan bedrock and skyscrapers above required a tunnel boring machine to avoid impacts on the surface.

Here simple cut and cover could be used. The existing embankment was built through farmland so there are no utilities to move except at the few cross streets. Buildings would be 50 feet away from the tunnel and would have little to no impact on them. The tunnel itself would not have to be deep as there would only be a park on top. All of these factors would provide significant savings over past MTA projects.

South of Forest Park the right of way becomes more narrow and adjacent homes have encroached their back yards onto the site. Through Woodhaven the embankment runs below the elevated tracks of the J train to Atlantic Ave.

This is the trickiest section as the line runs closer to homes here than elsewhere. But there are options.

A new aerial guideway would be a smaller structure then the current earth embankment. Removing the embankment would open up space below for a walking and biking path. The guideway structure would feature high barriers to reduce sound pollution and prevent riders from seeing into homes.

As the right of way is much narrower here fewer options are available but plantings can be done to obscure the paths from homes.

The path below the guideway would extend all the way to Atlantic Ave.

Building a tunnel through Woodhaven would keep the current right of way through Forest Park as parkland and would provide a walking and biking path to connect the neighborhood to the park.

One downside to this is that at Atlantic Ave the tunnel would have to ascend to the surface to reach the final elevated portion of the line. There exists currently the LIRR Atlantic Branch tunnel running below Atlantic Ave which would be more complicated to tunnel bellow.

Due to the portal needing to be built somewhere between Jamaica Ave and Atlantic Ave the new bike and walking path would be cut short of Atlantic Ave.

Between Atlantic Ave and Liberty Ave the line runs on a 55 foot wide viaduct. The viaduct differs from the embankment as it is a steel and concrete structure open below the tracks. Currently the ground level of much of the viaduct is used a warehouse storage, garages, and chop shops. On both sides of the viaduct are city streets which further separates neighboring buildings from the line.

At Atlantic Ave there was once a track connection to the underground LIRR tunnel and has been filled in to become a bus parking lot. QueensLink envisions this parking lot to be converted into a large new park being able to support ball fields.

The LIRR had a station at 101-103 Aves but the QueensLink envisions a new station between 103rd and Liberty Aves.

Because of the existing LIRR tunnel along Atlantic Ave and the existing A Train Rockaway Branch connecting to the Rockaway Beach Branch tracks south of Liberty Ave the southern section of the QueensLink needs to be above ground.

The wide right of way combined with streets on either side will allow the new park space below the aerial guideway to act as a parkway. Bike and walking paths can be added or integrated into the sidewalks so that the space below can be used for basketball courts, tennis courts, a skate park, or farmers market.